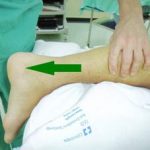 Simmonds’ test confirming an Achilles rupture. If the Achilles was intact the foot should move in the direction of the arrow when the calf is squeezed.

What is an Achilles tendon rupture?

The Achilles tendon connects the calf muscle to the heel (calcaneus) and enables “push off” when one is walking and running. A rupture of this tendon classically occurs when one attempts to ’push off’ and experiences a sensation akin to being kicked in the back of the calf.

What problems does it cause?

If it is not recognized and treated appropriately it can lead to weakness of “push off” and a limp. This makes walking (particularly up hills and stairs) difficult and running extremely difficult.

What treatment options are available?

If recognised on the day of the injury or soon after these can be treated in one of two ways:

i. Non-operative
In the past non-operative treatment involved the use of sequential plaster casts starting with the foot pointing towards the ground and gradually bringing the ankle/ foot up to a right angle (the classical below knee plaster cast position) with each cast. This technique has been superseded with the introduction of modern orthotics such as the pneumatic walking boot (of which there are a variety) in which the position of the ankle can be adjusted using a number of wedges under the heel. The number of wedges is gradually reduced gradually bringing the ankle/ foot up to a right angle according to strict protocol. The boot allows earlier weight bearing and can be removed (with care) for exercises under the guidance of the physiotherapists as well as washing.

ii. Operative repair
Essentially the two ends of the tendon are stitched together using a special technique. The ankle is placed in a plaster “backslab” with the foot pointing down towards the floor. After two weeks the plaster is removed and the skin stitches are removed. The ankle is then placed in a pneumatic boot with wedges under the heel. You are able to weight bear at this stage and will be referred to the physiotherapist. The number of wedges is reduced under the guidance of the physiotherapist according to strict protocol.

Whether your injury would be more appropriately treated operatively or non-operatively can be discussed with your specialist.